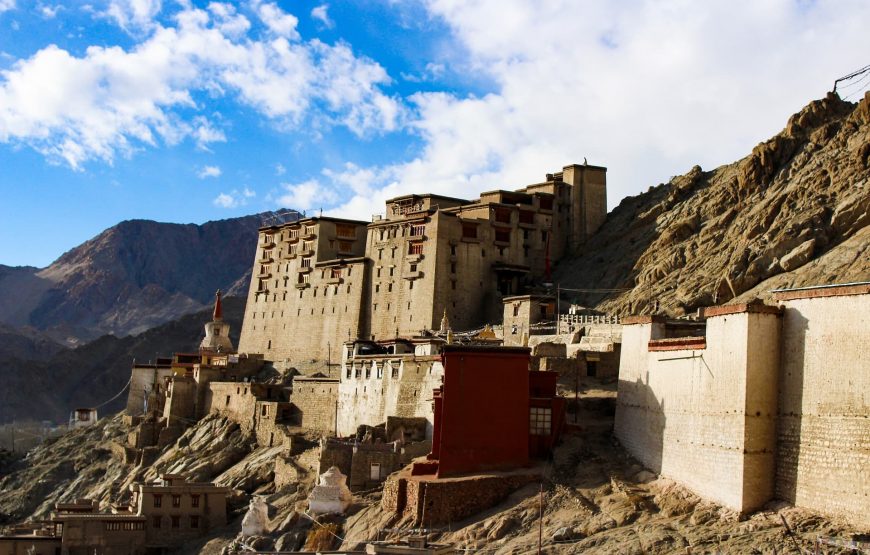 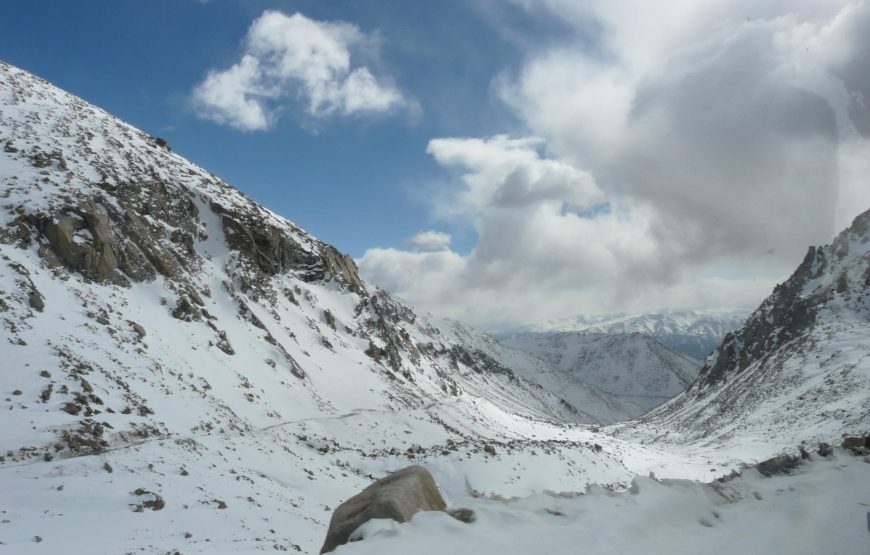 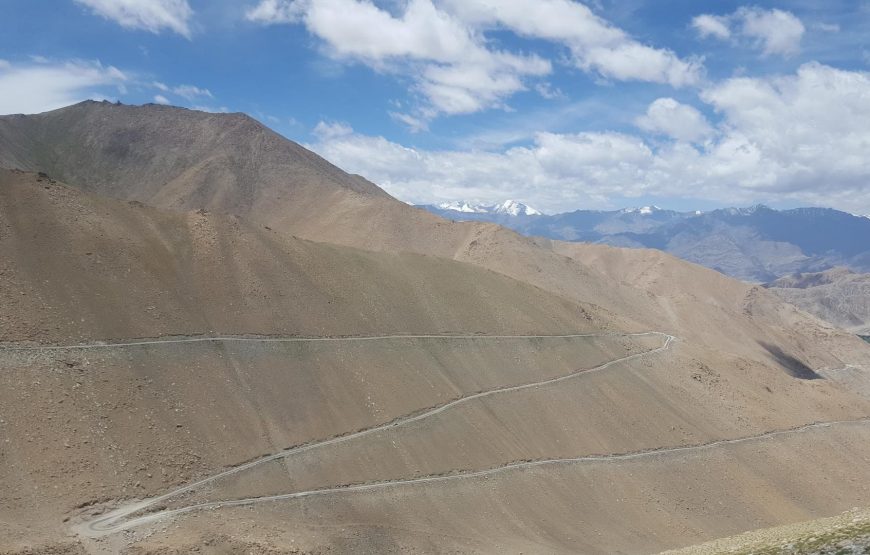 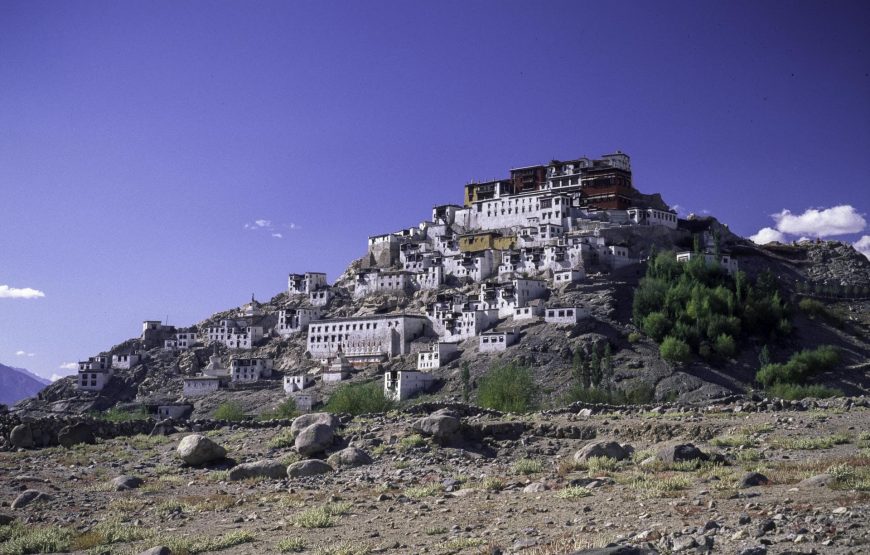 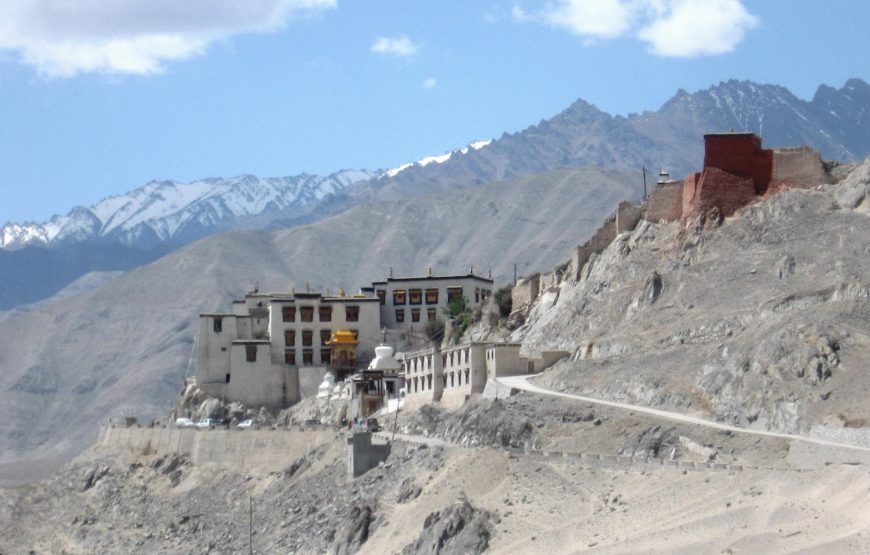 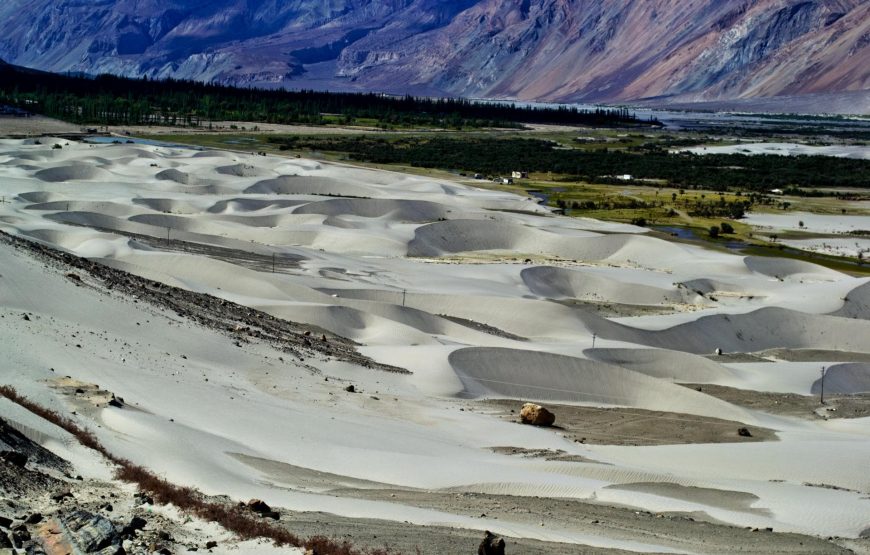 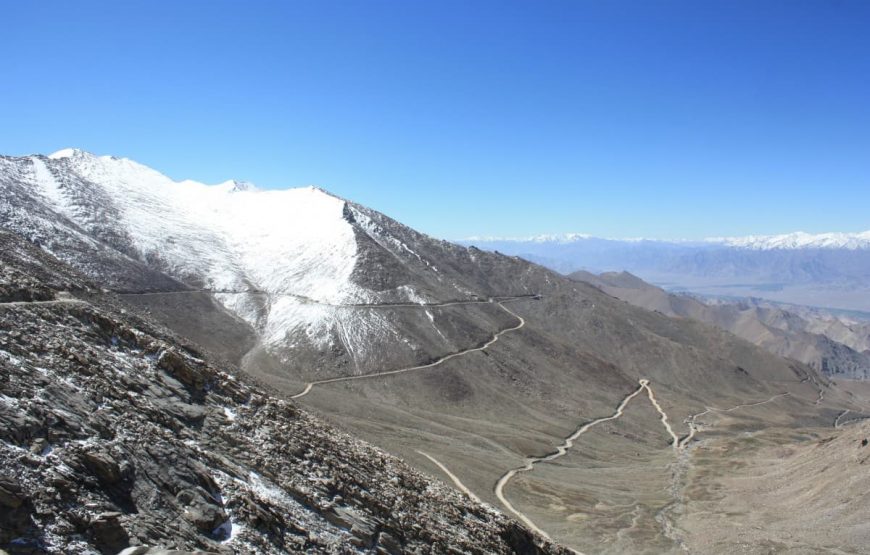 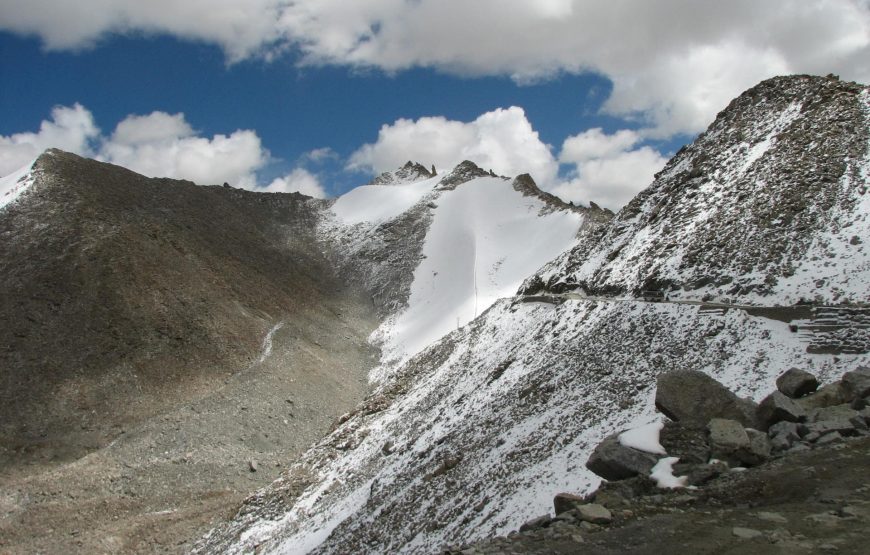 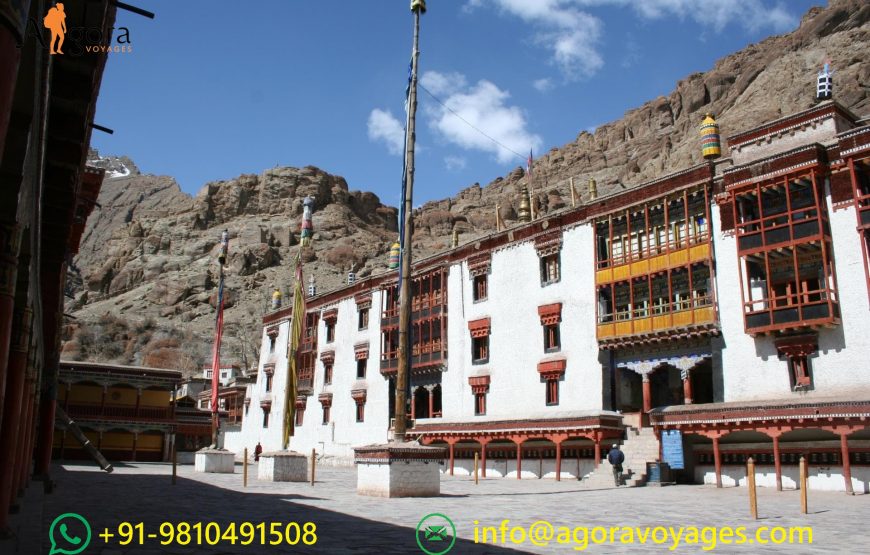 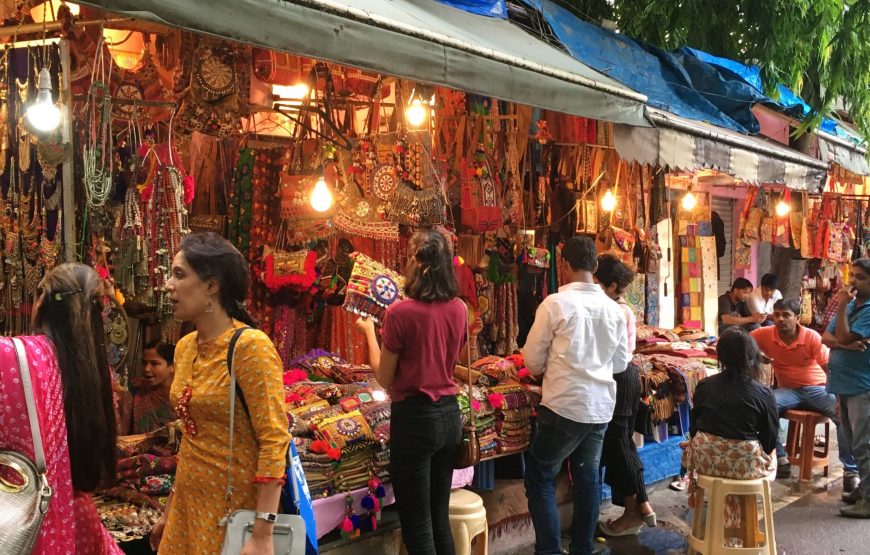 This tour will begin in Delhi the city with many monuments of Mughal-era, and then there’s the Himalayan land of Ladakh. Ladakh disarmingly friendly, ethno-linguistically Tibetan people are predominantly Buddhist. Their timeless monasteries are set between arid canyons and soaring peaks, while emerald-green villages nestle photogenically in highland deserts. The itinerary cover visit to Leh, Khardungla Pass, Nubra Valley & Pangong Lake. The iconic Taj Mahal, a mausoleum & symbol of love is also part of your holiday.

Breakfast at hotel. Transfer to airport to board flight for Leh.
On arrival assistance and transfer you to Hotel. Rest time to acclimatize at the high altitude. Evening walk around Leh Town. Overnight at hotel.

Breakfast at hotel. City tour of Leh. Visit Leh Palace, a 17th-century former royal palace built under the patronage of King Sengge Namgyal, it used to house his family. The nine-storey dun-coloured palace now houses a museum and a prayer room, while the highlight is the sweeping view of Leh and the surrounding Zanskar mountain from the rooftop. The beauty of the Leh Palace still stands in pride with a lot of ancient Buddha relics, paintings, old utensils, cutlery used by the royal family and artefacts adorning the walls, most of which are almost 450 years old. Thiksey Monastery built in 1430 AD belongs to the Gelukpa Order of Buddhism. Lakhang Nyerma a Temple dedicated to Goddess Dorje Chenmo is within the Thiksey monastery. Apart from Lakhang Nyerma there are a few more shrines inside the monastery complex. Shey Palace and Gompa, built in the 16th Century AD, the monastery enshrines the Du-Khang with an almost 10 meter high copper statue of Lord Buddha. Shanti Stupa, a magnificent white-domed Buddhist monument located atop a steep hilltop at a dizzying height of 11,841 feet. Built in 1991 jointly by the Japanese and Ladakhi Buddhists to mark the completion of 2500 years of Buddhism and to promote world peace.
Also visit the popular Magnetic Hill of Ladakh, a cyclops hill where vehicles defy the force of gravity and move upwards on the hill when parked at the marked location. To experience this phenomenon, park the car in the neutral gear in the yellow box marked a few metres ahead of the Magnetic Hill road. From this point, the car starts moving at a speed of 20kmph. Overnight at hotel.

Breakfast at hotel. Drive to Nubra Valley via Khardung La, a high mountain pass in Ladakh region. Situated at an altitude of 18379ft., Khardung La is believed to be the highest motorable road in India at an elevation of 5602 metres. It offers astonishing views of the twisting roads up the mountain and the awesome valley. Drive between Khardung La and Nubra alongside the Shyok river. Visit the Samstanling Gompa in the Sumlur village. The place is in the middle of pleasant scenic beauty and is surrounded by traditional hues of Gold, Red Ocher and white. The entrance of the Monastery is lined with religious flags and the inside halls are lined with wall paintings representing Buddha and his lectures, Dharamchakra, the Four Heavenly Kings and the other facts of Buddhism.
Next stop at Panamik to visit Hot water springs which contains high amounts of sulfur, and is believed to possess a lot of medicinal properties. Head to Hunder the sand dunes village amidst the cold desert of the Nubra Valley. The gorgeous silver sand dunes are located at an altitude of 4000m and are bounded by snow-capped mountains. Ride Bactrian Camels to the remote village of Hunder. Check in & overnight in tent/ guest house.

Breakfast at hotel. Visit Diskit Monastery, the 14th century monastery with a huge Maitreya Buddha statue atop it is considered to be the largest and oldest monastery in Nubra Valley. From the base of the statue, one can get a gorgeous panoramic view of the Nubra valley. The monastery was founded by Changzen Tserab Zangpo in the 14th century and is situated on a hill above the plains of Shayok river. The monastery house a vast collection of murals and display of frescoes.
Later drive to Leh again via Khardungla pass. Arrive Leh, check in & overnight at hotel.

Breakfast at hotel. Drive to Pangong Lake taking the road via Karu. You will pass by the beautiful green valley of Shakti as you ascend towards Chang La the third highest motorable pass in India. As you drive down from the pass you will reach Tangste village, Enroute you will see many endemic and migratory bird species and will certainly encounter the Tibeten Marmots. The landscape as you approach Pangong Tso is breathtaking! At an altitude of 4350m Pangong Lake is an endorheic (landlocked) lake. It changes colours from azure to light blue to green and grey.
On arrival check in at camp/ guest house. Spend time soaking in the beauty of Pangong Tso. Overnight in camp/ guest house.

Breakfast at hotel. Visit the surrounding and village nearby. Later drive to Leh, check in & overnight at hotel.

Breakfast at hotel. Transfer to airport to board flight for Delhi.
On arrival at Delhi airport meet your driver and proceed to Agra check in at hotel. Evening Watch Mohabbat the Taj show. Overnight at hotel.

Sunrise visit Taj Mahal an ivory-white marble mausoleum commissioned in 1632 by the Mughal emperor Shah Jahan to house the tomb of his favourite wife Mumtaz Mahal, it also houses the tomb of Shah Jahan himself. Breakfast at hotel. Visit Agra Fort the main residence of the emperors of the Mughal Dynasty until 1638. And Itmad-ud-Daula Tomb commissioned by Nur Jahan for her father Mirza Ghiyas Beg.
Later drive to Delhi and drop off to airport. 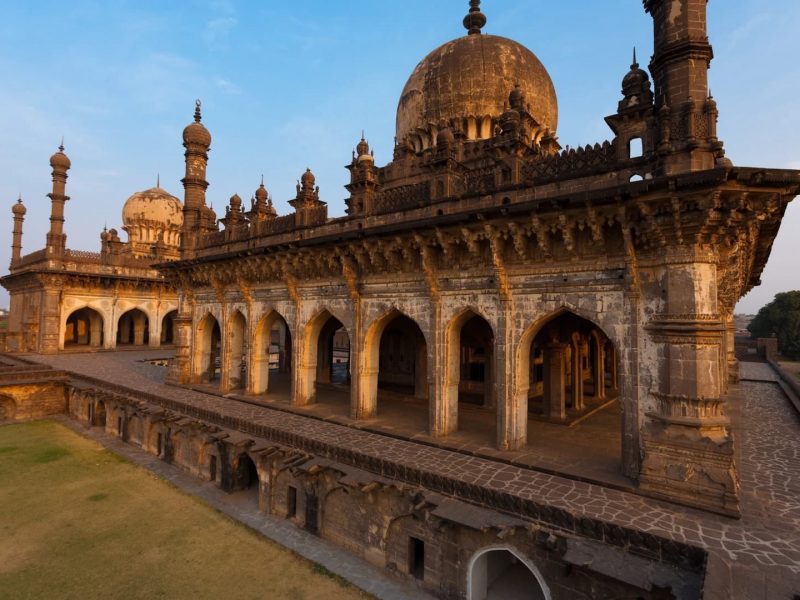 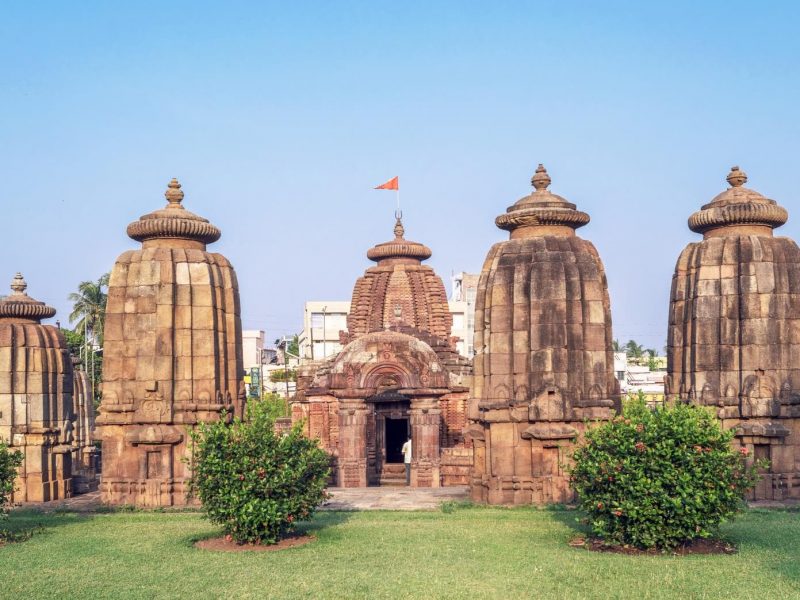 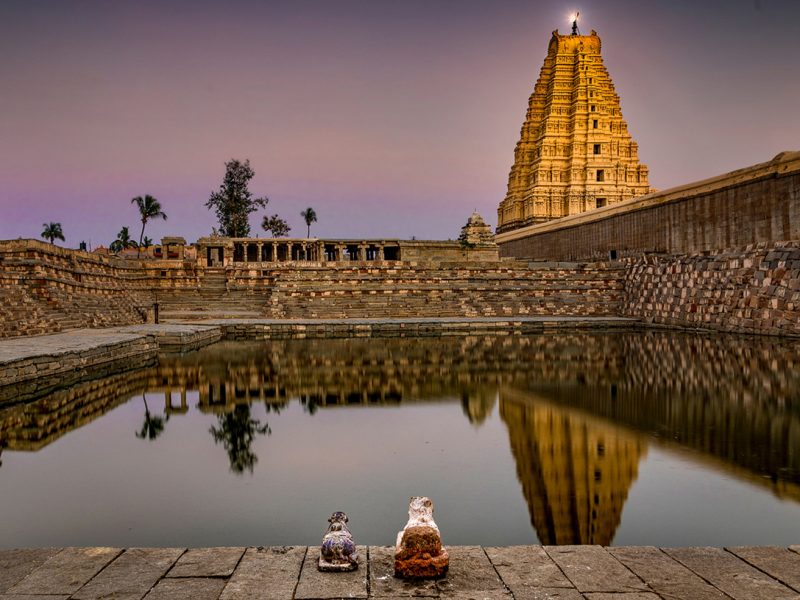